The complexity of EB requires a variety of different therapeutic approaches

EB is a systemic disease, and for some severe subtypes systemic treatments or cures are essential to ensure survival and quality of life. Step-change improvements to tissue integrity for EB patients will be made by addressing the underlying defects in the structural proteins. To remedy these defects, diverse technologies currently being developed include topical and systemic treatments to provide a functional protein through correction of the primary genetic defect at the DNA or mRNA level, or by the direct provision of protein.

Therapeutic strategies explored in clinical studies range from different types of stem cells either donor-derived, or patient-derived and gene-corrected, to corrected fibroblast or keratinocyte treatments, injected intradermally or engineered into skin grafts. Other approaches include the application of a healthy protein, gene or gene transcript, antisense oligonucleotides, and premature termination (PTC) readthrough drugs using various routes.

What is Epidermolysis Bullosa?

Understandig EB and its classification. 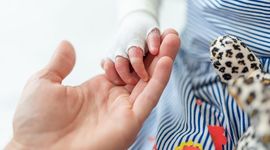 Why is it so difficult to find a cure?

More about EB research
Back to main navigation